When Should You Replace the EGR Valve in Your Audi?

Although we do not like to admit it, pretty much all of our vehicles now pollute the world we live in and the air we breathe. There are many systems and laws in place to try and limit the amount of exhaust emitted into the air, and EGR (exhaust gas recirculation) valves are one of them.

Beyond emissions, many of us are concerned about the health and efficiency of our vehicle itself. For all internal combustion engines, there is an exhaust gas recirculation (EGR) system in place. This makes sure that a portion of the engine’s exhaust gas is cycled back into the engine cylinders. This emissions reduction technique is used in vehicles powered by gasoline as well as by diesel.

What Exactly Do EGR Systems Do?

By definition, the EGR system takes the exhaust gas, adds it to the fuel, oxygen, and combustion products, which then increases the specific heat capacity of the cylinder contents, which lowers the adiabatic flame temperature. This allows for better efficiency in gas engines as well as diesel engines. This in general simply means that the EGR valve will reduce cylinder temperatures and NOx emissions.

Deciding to Clean or Replace an EGR Valve

The EGR valve could, over time, become clogged with carbon deposits causing inefficiency and malfunctions in the system. This is due to the recirculation of a portion of the exhaust gas. Sometimes, the EGR valves simply need to be cleaned, but eventually, they will also need to be completely replaced.

If you suspect that your EGR valve is malfunctioning or may need to be cleaned, you can remove the EGR valve itself. Generally, you just need to shake it to hear if the diaphragm has the ability to move around inside. This will only tell you that it may need to be cleaned, but if you don’t hear anything, it will more than likely need to be serviced because something more severe is wrong with it. If you suspect that it needs to be replaced, you will have to have it tested and serviced by a professional mechanic.

Symptoms of a Failing EGR Valve

If you are concerned that your EGR valve is malfunctioning or failing, there are a few signs that it may need to be replaced soon. The primary symptom of a failing EGR valve is general engine performance issues. If the EGR valve is clogged or malfunctioning, you may experience engine issues in regards to reduction of power, acceleration, or fuel efficiency. Beyond engine efficiency, the most common signifier of EGR issues is a rough idle. This will tell you that the EGR valve is stuck in the open position.

Leave it to the Professionals

Since the EGR valve is a vital component of your vehicle’s engine efficiency and emissions production, and some states have very strict emissions regulations in place, 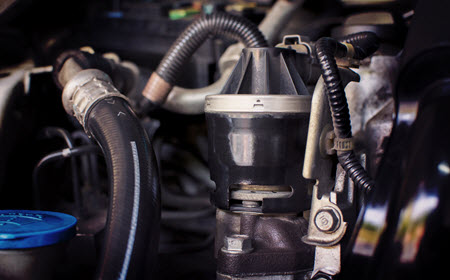 if you suspect that your vehicle’s EGR valve could be malfunctioning, it is important to have it looked at by a professional. This will allow you to determine if it needs to be replaced or simply just cleaned.

If you live in or around Orange County area, including Mission Viejo, Lake Forest, Costa Mesa, Irvine, Huntington Beach, Laguna Hills, and Laguna Nigel, CA and you suspect the EGR valve may need to be replaced in your Audi, contact the professionals at Mark Douglas Motorworks. The experts at Mark Douglas Motorworks will be able to direct any and all questions and concerns regarding the functionality of your EGR valve and your vehicle’s health.